If I could represent my life in colors, I’d say there have always been two layers, as in Photoshop: First, my personal life would be represented by the rainbow. Furthermore, the layer of responsibility (school, college, work) would be painted with different shades of brown. The brown layer is over the layer of color, so that when the amount of painting overturned is too much, it ends up transferring to the personal layer and an interesting concoction is armed.

I met Maria Isabel Torres precisely in one of those moments: My professional layer was flooding and it began to fill all my environment with brown.

For some reason that still baffles me, Isabel was authorized to provide training onemotional intelligence to employees of the company where both worked. I guess that due to the unawareness of the effect it would have on employees, they gave the nod and there I got registered without hesitation.

Isabel told us about the intrapersonal part, to learn to identify concepts such as self-esteem. We were asked what is for us a person with high self-esteem. Each person in the group said something different. Most of the concepts that appeared to define it were related to the image projected by a person outside, with external signs that are generally related to safety.

I loved seeing how Isabel also noted how receiving from others is also a part of that self-esteem: Listening, hearing opinions without making value judgments about people, knowing how to separate what people make of what people are… “It’s not the same –Isabel said– telling my daughter that her room is cluttered and requesting her to clean it and to organize it, than telling her that she is a messy and a dirty person. The impact on her self-concept will not be the same…”

Isabel unknowingly gave me the tools to channel hectometres of brown paint that came over me, and preserved my rainbow intact.

A few years later, I have been lucky enough to meet her again to receive great news: She is devoted to professional training in emotional intelligence through her companyCreaEmoción. But let her tell us all about it:

Training In Emotional Intelligence: The Birth Of An Idea

“In January 2016 I left the company. I had already begun to train people earlier. It all started as a cultural association. My sister has a cultural non-profit. We started in October 2015 in Alcalá with a free talk. 45 people signed up and we gave two talks.”

“After a free talk, we spent a questionnaire where attendees were requested for their emails and phone numbers and if they were interested or not. We contacted them with schedules, prices, etc. Of the 45 initial, up to 21 people signed and in Alcalá two groups were formed. In Guadalajara there is a community center for the elderly where there is also a group going.”

“From the very beginning, training has already begun to work, without having to do commercial work. Emotional intelligence is largely unknown, but the term is very fashionable and attracts attention. If you do what you’re passionate about, things happen. My partner (my sister) sent a mailing to schools, parents’ associations, etc”.

“We offered to give a free conference at a center so that they saw a notion of what is emotional intelligence and 150 parents signed up. We had to do something for teachers. They had never really taken off in a call.”

“There are already six active groups and next week the seventh begins: More than 80 people who are currently getting trained in Emotional Intelligence in face to face format with CreaEmoción”.

“Through the application of WeLearning, we also ride a school of emotional training, to provide online training and reach everyone”.

“I did not take communion in the form of pills with 4 hours workshops on weekends, – says Isabel. Emotional intelligence is like a language, it is a process.14 or 15 emotional intelligence competencies are divided by levels (the first two are held with the intrapersonal skills and a third level with interpersonal skills). In total, there are between 50 and 60 hours of training. We teach two hours a week for six to seven months. We request an initial commitment of 8 sessions. We rent the classrooms that meet our requirements based on demand.”

“The average price of training in emotional intelligence in Spain is 20 euros per hour and I offer it to 6. But the quality of my training is high. I do not care about money, it is not a target. I do not intend to do business with this. To me, it saved me from an illness. What I want is to sow the seed. I’m self-made. This may arouse suspicion (“Why is it so cheap?”, they ask), but I do not care.” 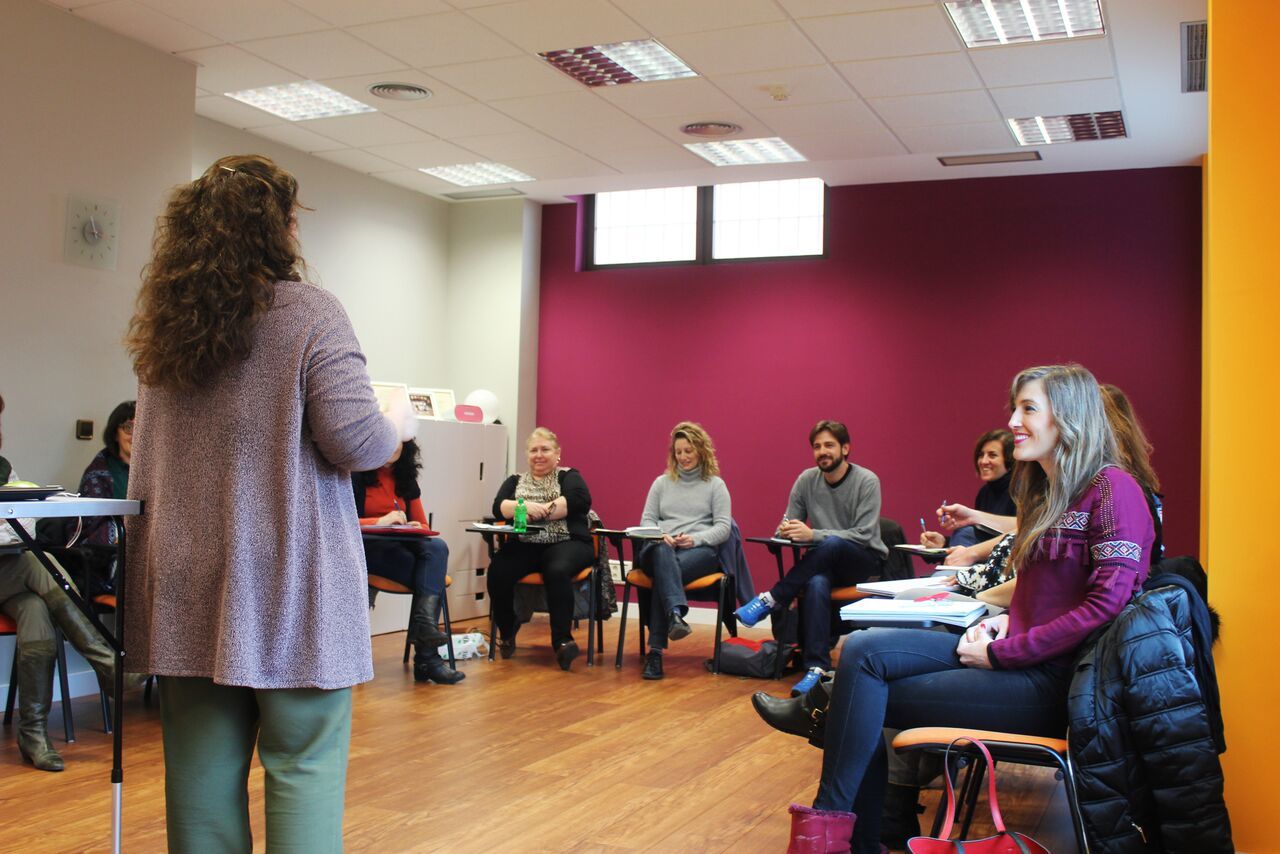 Results: A Commitment To Change

“Emotional intelligence has many skills. Open training has had many results, such as awareness, skill development, removing old concepts that are not clear to people and that by changing them, things could get better. The tool must be individual, for the individual and the context. It is a personal growth. Terms like self-esteem, self-concept… are defined to an awareness that operates growth.”

“Teachers and parents, professionals, want to secede to have own tools for parents, for teachers or for management. But I offer them growth as a person, so they can apply it to their profession. I want them to mingle.”

“The changes I see in people is what motivates me, what excites me. A student of Guadalajara when he got registered out of curiosity, had no job and had lost his wife. He was alone. Change is more obvious in people that is beginning from the top down. The first classes were a frontal crash. This person has been a year of training. There are testimonies on the web, point by point of his improvement process. Now he has many people around him. People come to you because what you project is attractive to people.”

“In the group of Alcalá there are a lot of women. A man came on the recommendation of his wife. He is a leader who has the picture of a rottweiler placed on the door of his office. He’s super intelligent. At first, I was told by his companions that he had come to break open the class. He has now four classes. First he went through a phase of rejection, then he realized, he considered himself a “toxic” person and and now he is working to strengthen his potential.”

“A social counselor changed her view to a girl and her parents, with whom she was having serious problems, and have even been said that she is the best guidance they have had. That change occurred in one session.”

“I feel the well-being that comes from internal consistency. People with brutal shortcomings cannot see others, because they have so much work trying to make up for their shortcomings, that they cannot see anything else. It’s like a disease. A self-esteem allows you to lose the fear of the consequences and not a destructive criticism affect you. You have to work the personal potential to open opportunities. You have to work trust. We rely on objective data disguised as barriers. You have to see the glass half full and half empty, but put all the energy in the full middle part. Auto wreckers have to know how to identify them and work with them. I need to trust evidence, but I choose faith and I can have faith in my own abilities.”

“The capabilities are reflected in a bell curve. With little stress there is little cognitive activity; with a controlled stress you get to a flow state that allows you to be on top, and an excess of stress will nullify you. We must maintain the state of controlled activity.”

“So far we do not have the focus with children or special education. It is all about letting them keeping what they naturally bring. I have a ten year old daughter. At school, she has a complicated teacher. It is when your strengths get tested. When being 10 years old, if you have a healthy self-esteem and have not unlearned, you’re on the road.”

“My daughter tells me that the teacher says in public what they do wrong and that this embarrasses them. My advice was: “Tell her about it respectfully, without charge, without judging, being assertive”. In the end she did it and she spoke to her at school. The teacher got very angry, she spoke very quickly and that afternoon at class she mocked at her. Then I helped her to make a positive reading: She has dared to confront a situation and the teacher payed attention to her. The important thing is not the situation itself, but how do you read it. An enhancer criterion is constructed and children grow by themselves. This example I’ve told at school and it is true that there are people who feel challenged.”

“I lack at the moment the organizational leg. In organizations I entered very little. I have worked with Telefonica to middle managers and executives. The valuation was very high in the first pilot and second pilot was prepared.”

“Companies tend to be shortsighted, but every transformation implies a while. When I meet someone, they believe me quite soon. It might be because I tell the story from the heart, I live what I tell you. A school director told me that I cannot give emotional intelligence tools to the teachers so that they apply it to their students. What I do is making them intelligently competent people, so they can apply it in class. Teachers receive training as an imposition of its center, they feel challenged.”

At the moment, with training in emotional intelligence, CreaEmoción provides a certificate of achievement, but it is being considered to make the leap to a degree. What are the steps to provide a title? In Spain, the official master ‘s degrees are regulated by the National Agency for Quality Assessment and Accreditation (ANECA), under the Ministry of Education, Culture, and Sport (MECD). These official qualifications are comparable in the 47 member countries of the European Higher Education Area (EHEA).

University qualifications are approved by the boards of universities and business schools, and are subject to more flexible regulatory standards. Thus, institutions can establish master, diploma, and degrees of expert / specialist, certified diplomas and degrees, based on internal regulations, unlike the official titles, as established in theOrganic Law of Universities.